What are the things donors should take in to account when giving funds to organizations in Sri Lanka?
A small scale foreign donor asked me the above question and I actually Googled to find a proper answer. But failing which, I realize I can answer this question to a reasonable extent. I have come across many NGOs in various stages in different contexts. This article contain some information I gathered during my involvement with NGOs as an employee, as a researcher and as an informed citizen :). I have audited many NGOs, but my professional ethics prevent me from disclosing any of those findings. But the things I experienced surely leads me to  this article :) 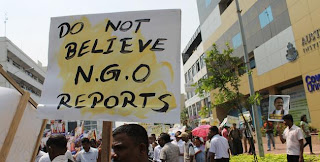 How to simply assess the suitability of an organization to receive funds and what to consider?

1. Ask what they do?
First of all, simply ask what do they do? You might laugh at me. No don't :D Because there are so called NGOs who cannot answer this question. Most probably they will give you one of the below answers.

But they won't tell you  how. Because they have never thought about how. Ask whether they have an action plan? Do they have a time frame attached to the action plan? What have they already done on that? Or are they just waiting till the funds come?

Sadly, in a country like Sri Lanka, number of members in an organization does not mean much. In most European  donors allocate the funds to organizations based on the member density of the organization. But they rarely consider who are the members or why they joined. I came across one organization who kept asking public to fill a membership form and send the via online, so that they can do this particular thing (If I mention it here, people will identify it. So I won't "D). When people ask what they do, they say , simply fill the form and send , then we will tell you. I mean if you are doing a social service important to whole society, why can't you say it in public? So my dear donors, forms does not mean anything in Sri Lanka. People here are very generous, very good hearted, if someone ask to fill a form to save the country, they will fill without asking anything :)

Project progress can be easily evaluated half way through in some NGOs, but not always easy in every case. For example, if the organization says that they will build 100 toilets in a plantation village, it can be actually checked by numbers at least in the form of an audit. But if its a NGO who is working on uplifting the education of children, its not easy to measure that.

So always look whether they  can have an achievable target. Look how big their scope is. I remember, about 15 years back I came across an organization who was working on education people on dental health. They picked couple of remote villages, organized many workshops in schools, offices and roads and explained to people on how to brush teeth (trust me at that time it was a need) and many other related information on that topic. It was really successful and most of villagers' actually had a good knowledge about it while many were following their instructions. Quite less number of  sicknesses reported after their campaign compared to earlier.

Likewise tell them to focus on a small arena they can actually work on. Then move to rest of the areas. For example, if they want to reduce the number of women who get sexually abused, they can always start it with one police division. They can educate people, help the police to bring the criminals before law, rehabilitate or help the victims etc. So still its measurable.

Do not ever give funds believing pictures or nicely done files / reports unless those are publicly available :D For example if they are on their Facebook page or on national media, then it can be believed to a certain extent. I have come across very funny situations where people tried very hard to get pictures to cheat the donors.

One incident I clearly remember is below. There was a botanical garden in Pallekale which belongs to department of Ayurveda. It has many important plants use to make Ayurvedic medicine. One day a group of posh aunties who were on a trip (I mentioned them like that, so Sri Lankans can picture them) came there and asked the guard, whether they can take some pictures. There was nothing wrong in taking pictures in a botanical garden, so the guard permitted. But he noticed that these ladies are taking pictures in front of plants, with a banner. Banner has something which implies that the garden belongs to them and planting was their project. So the guard informed the officers and they came to the garden during this process. When they question, these ladies very honestly said that they are from some NGO, they have taken money from donors saying that they are plating trees, but they haven't plant any and therefore now need some pictures to send to donors as proof ! :D


5. Why do they cut and paste news articles?

I know couple of people who work in NGOs relating to rehabilitation of war victims, helping the child rape victims etc. Even though their objectives are different all of them do one similar thing. That is cut and paste the news relating to their field and paste it on another book. Or post it on their Facebook page.

First I thought their objective is to provide the news. No it wasn't. Then I thought may be they are taking statistics as to how many children got raped or how many soldiers lost legs with land mines etc. No that's also not the case. Then I thought, ahh yes may be they are collecting information, so that they can go to them and help them in someway. I gotta be kidding my self. No way. Its simply to prove a donor that there is a need in the society to address a particular issue. For God sake, are you donors so dumb?

I'm too sleepy. Should go and sleep now. Will write the rest in another article.

p.s to note - There are good people too. Having said all above, I must say there are many NGOs in Sri Lanka who has done/ is doing a great service to the country and its people. I've met people whom I can truly respect. They are everywhere. Starting from some organizations who are in North involved in removing land mines to organizations who are in South working on educating pregnant mothers, they have really done their part. So this article must not do any injustice to them.

All I can say is, just use your common sense. Yes there are fake NGOs in Sri Lanka. So be careful in giving funds without analysis.

Email ThisBlogThis!Share to TwitterShare to FacebookShare to Pinterest
Labels: NGOs