What NOT TO DO when raising a daughter?

Bring up a girl child is one of the most challenging yet very satisfactory experience in life. A girl's life is mostly depend on how the parents brings her up. Having the opportunity to be open up with many girls and many elderly women, I thought I should summarize this article in to what are the mistakes we do with brining up a girl and how to address and overcome those. 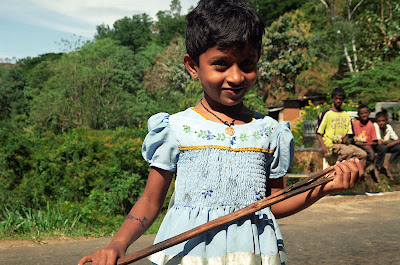 
These points are not in a particular order.

Mistakes parents do when bringing up a daughter

1. Giving only girly toys such as dolls and kitchen sets.

This essentially gives them the message that love only babies and kitchen, that's your only duty. But then expect the girls to do science subjects in A/Ls and achive good marks !. Parents often give Legos and cars and other mechanical toys to boys, but not for girls. They were never given a chance to fix a bulb at home or change a tire in vehicle. When kids grow up, everyone insults the girls for not having a techno feel. Its all their parents fault.
2. Telling them over and over that only sinful people become women and blissful people become men.
Leave alone Muslim parents who anyway suppose to teach the daughters the place they deserve in society. But I've heard many Sinhala Buddhists says this. Lord Buddha never said so. So don't interpret things and put nonsense in to kids' heads. This will always make them feel lower and they are at the service of others. I've met many elderly women, who are very frustrated with life, but yet lives with it thinking that's the life of a women. Women is born for the service of others? Is that how your daughter want to think someday? So that the society will respect you for raising up a decent well mannered girl as they mention in marriage proposals? Oh just trust me. You do that to your girl, she will suffer in silence for the rest of her life.

3. Force them to play badminton or netball because those are what girls suppose to play

Let them play a sport which they like. Let them play what ever they want. Let them watch cricket matches and football matches if they like. That won't make them homosexuals (no disrespect in anyway) as one father argues with me. If you make your daughter a strong person, no one can force her in to join with something which she is not. It has nothing to do with a sport. Let them play what they like and you be with them and help with their problems as and when needed.

4. Telling them that romance is something like a criminal offense.

If you don't want to educate them as to what romance is, just keep shut. Some day she will have to grow up, she will have to get married. Men will be men. No point making your girl an anti sexual person unless you are sending her to a seminary or rather a convent or become a "dasa sil maathawa" (a female Buddhist priest). Its mostly the fault of the traditional social norms that most Sri Lankan men have a wife and a girl friend at the same time.

"I want my child to be someone a man like to marry for life and not someone a man like to look at and have temporarily". One mother told me. Why cannot she become the both at the same time? I asked. This is not about encouraging teenage girls to have sex or to become teen mothers or something. Hell No !. For example, if they are watching an innocent movie with loving dialogs, stop telling them "what nonsense"! . They will grow up to feel that talking romantically is a sin and nonsense.

And don't confuse them to think that sex and rape are one and same !

5. Dress them in absurdly oversized cloths

Help her to look pretty and maintain her body. Just because a girl child wears a pretty dress doesn't mean she is going to be a prostitute. Try to educate her on the importance of dressing according to the place. Dress is something which affects the personality of a child. So do not mess with it. Your daughter do not have to wear all short skirts and bath in cosmetics to look pretty. Teach her that she don't have to look like those blondes every boy is so fond of going out with. But dress gracefully. Dress like a girl. There's nothing wrong with having a perfect body shape. Its healthy.

There's no harm in telling her that she looks pretty. I'm sure you don't want your girl to hear it from an outsider for the first time in life and get all glad to him only for that even though that is a bad person.

6. Pass the burden from the society to the child

I saw the below lines from a mother of four girls.
"life held no bigger prize than the joy of raising daughters" - Joanna Moorhead
Unfortunately this will not be the mentality of a mother of a girl in countries like Sri Lanka and India. Its lot better now days compared to it was two decades back. But still there's immense pressure for a mother from in-laws if she failed to give birth to a boy.  When a lady get pregnant, all relatives from her husband's side are hopeful that it will be a boy, so he will carry the family name. The stress put upon the mother will eventually lead her to hate her daughter. I know many women complained to their daughters that since the time they were born, their (mother's) life was a hell and no body respected her. Its not the mother's fault. It happens. Society should be responsible for that.
But just try not to pass the burden to that poor child who had no choice with her been born as a girl. Its not her fault. She could have been a lot better family member someday. She will hate her self from childhood if she was blamed for her birth.

7. Cut her hair like a hair of a soldier

What is the easiest way to cut a girl's hair? Well who cares about how a little girl look? So cut it at home with a pair of scissors her mother use to cut cloths ! Or why not her daddy takes her to his saloon and ask his barber to cut her hair very shortly, so that he won't have to take her there any time sooner?
One of my friends complain that little girls born in Sri Lanka are ugly. I told her that, they are not ugly, its the way they are forced to look like. Back to my question on who cares how a little girl look like? Well she cares. Children do understand and feel things lot more than you think.

8. Not paying any interest or attention to learn about children or associate with children

"We feed them, we buy them cloths, we send them to school, we buy them books and toys, what else they want?" One father ask me. This is a father who never bother to spend some time to speak with his teenage daughter. He preferred to read his news papers in the free time he get than talking with the child.
"Everyone in my daughter's class have smart phones, so I too bought her a one. Because I don't want her to get left alone and feel like poor." Another father told me. But this particular child did not want a smart phone. She wanted to grow her hair up to shoulder length. Parents rejected it saying that its hard to maintain a long hair (mind you its just shoulder length) while studying. Because her mother thought she will have to help with combing it and platting it every morning. Father thought boys will fall for her if she looks pretty with bit longer hair.
I was talking with this other girl who was having a problem at school. I asked her "why don't you discuss this with your parents?". She said "all my parents happy to talk about is how much marks I got for the monthly tests and how much marks my friends got" !.
Above are few examples. Its up to you to decide what you lack and be a good parent.

9. Never telling them that you love them and will be there for them no matter what happens

What's wrong with showing her that you love her? Every child needs to be loved. Make sure you tell them that parents will be there for her and to help her in nay matter. Then she will come and tell you things even if she does a mistake. Make sure you listen before started commenting. Scolding won't make any good. If you can help her to feel good and then make her feel understand why its wrong or why it shouldn't' have been done its great.
10. Not teaching them that saying "No" too is an option
"Teach your daughter to express her needs to adults and stand her ground with her peers. If another child is being mean to her, encourage her to say "I don't like the way you're talking to me." - (taken from http://www.babycenter.com/0_10-tips-for-raising-a-confident-girl_10310248.bc)
I've seen most girls become nervous when they have to say no for something which they actually should say no.
Note -

I just love the below article too. Couldn't have said it better than that.

Except for a few most of these apply to raising boys as well. It is unfortunate to see how some parents ruin children by following same old conventional bullshit they experienced back then.

I agree. Most of it apply to boys as well. Most parents I met genuinely thought what they are doing is right. They had no interest in understanding anything out of their own beliefs. Sad indeed.